Horse racing has a long history across the world. Even in ancient times, archeological evidence proves that people engaged in horse racing. From Ancient Greece and Rome to Egypt and Syria, ancient Mediterranean peoples in particular considered horse racing a sport as well as an art. Over time, horse racing began to split off into different branches based on the type of race (whether long distance, short sprints, or including obstacles) as well as the type of horse. As the Middle Ages in Europe came to a close, horse racing became more refined and regulated.

In the 1700s, Thoroughbred racing became known as the ‘Sport of Kings’ given its association with the upper classes and aristocracy in Great Britain. Rules were set in place, designed to ensure fairness in racing as well as help regulate the booming betting market.

Over time, the rigorous pedigree of racehorses became of upmost importance as owners attempted to sire faster and stronger horses. For instance, the American Stud Book dates back to 1868.

Jockey clubs and official derby races also began forming around this time. The British Classics emerged with the first St. Leger Stakes in 1776, while the esteemed American Triple Crown of Thoroughbred Racing didn’t kick off with the Belmont Stakes until a century later in 1867.

Despite the illustrious history associated with horse racing, the sport today is considered part of the same extravagant lifestyle that helped coin the term ‘Sport of Kings’. And there’s a good reason for this moniker, too, considering horseracing tends to be a losing investment for those with enough money to buy and train a racehorse.

While being a successful entrepreneur doesn’t mean subscribing to a certain set of rules, there’s one basic idea behind every business: profit. Looking at horse racing from this perspective may seem cold, but just like the NFL is played for the love of the game, it’s also a money-making machine.

And, before diving into the expense sheet for owning a horse, it bears mentioning that there are ownership models that see co-owners pay as little as $7,000 for a strong racehorse. However, buyers annually spend around $377 million on year-old racehorses that will see one or possibly two years of action on the racetrack.

In 2018, 27 year-old horses, known as yearlings, sold for over $1 million. Three of these yearlings sold for over $2 million. Factors here include parentage, with top buyers speculating on the likelihood of sire and mare pairings that will produce a yearling who wins races someday.

From a business perspective, owning a racehorse doesn’t make fiscal sense. For a horse that costs up to $2.4 million, there’s often no ROI in the works for an owner—unless, of course, the horse can win major races… and thoroughbred races, at that.

But even major races, like the US’s Belmont Stakes (just as illustrious as the Kentucky Derby), have a purse of around $1 million, which means the winning horse and jockey take home only $535,000. Given that favorites are selected by pundits like Matt Bernier at RacingPicks before major races, most winning horses are predicted long before the race begins.

For example, the aforementioned Triple Crown of US Thoroughbred Racing is a title given to an elite racehorse that wins all three major races in the US: the Kentucky Derby, the Belmont Stakes, and the Preakness Stakes. To become a Triple Crown recipient, a horse must win all three of these races in its inaugural year.

It’s an incredible honor that isn’t often seen. In fact, only a handful of racehorses have ever managed to attain Triple Crown notoriety. For this feat, the most recent winner, named Justify, earned $3,780,000, which means owners saw a massive return given they paid $500,000 for Justify.

However, Justify’s winnings will be split between the jockey, the trainer, and Justify’s multiple owners—not to mention, winnings go toward a slew of technical and administrative fees that add up quickly. The true worth of a thoroughbred racehorse is to be sold following a killer inaugural year not to continue racing but to produce offspring that will hopefully inherit a winning stud’s speed.

And how much will breeders pay for a steed like Justify? Since being blessed with a Triple Crown, Justify’s worth has now ballooned to $75 million. The Allure of Horseracing

Given the extravagant costs associated with horse racing and the low probability of ever seeing a return on investment for an activity with steep overhead expenses, horseracing may be viewed as a passion or hobby more than a sport.

Some people simply adore horses and view them as powerful and elegant creatures. Though horseracing produces around two deaths per thousand racehorses annually, trainers, jockeys, and breeders who devote their lives to these animals have a deep partnership and trust with each horse they care for.

In other words, horseracing isn’t as much about luxurious derby’s and fancy hats—it’s about teamwork between a jockey and a powerful animal.

On the other hand, owners will often spend their time at races fretting about the horse they’ve invested so much in. However, the aforementioned co-ownership model of thoroughbred racehorses means that it’s not just millionaires or aristocrats who watch on biting their nails. Fans love to watch for the sheer improbability of watching an underdog horse win big.

Examples like Afleet Alex stir the hopes of many. In 2004, five friends bought the racehorse for $75,000 without expecting to see anything in return. However, the team managed to defy the odds of horseracing when they pulled a profit from Afleet Alex’s speed and power on the racetrack.

In 2004, Afleet Alex managed to take two of the three Triple Crown races (the Preakness and Belmont Stakes). While Afleet Alex didn’t sweep the Kentucky Derby to earn the Triple Crown like Justify did, the horse did earn $2.7 million in his single-year career.

The friends split the profits, though none of them continued to invest in racehorses. For them, it was a dream to own a horse and a wild ride to try to find a trainer and jockey who could turn the yearling into a champion.

However, Afleet Alex and Justify are exceptions to the general horseracing rule, in which the vast majority small fortunes and hopes are lost to that year’s top racehorses. 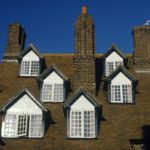 How A Gabled Dormer Can Update Your Home0 Total Shares